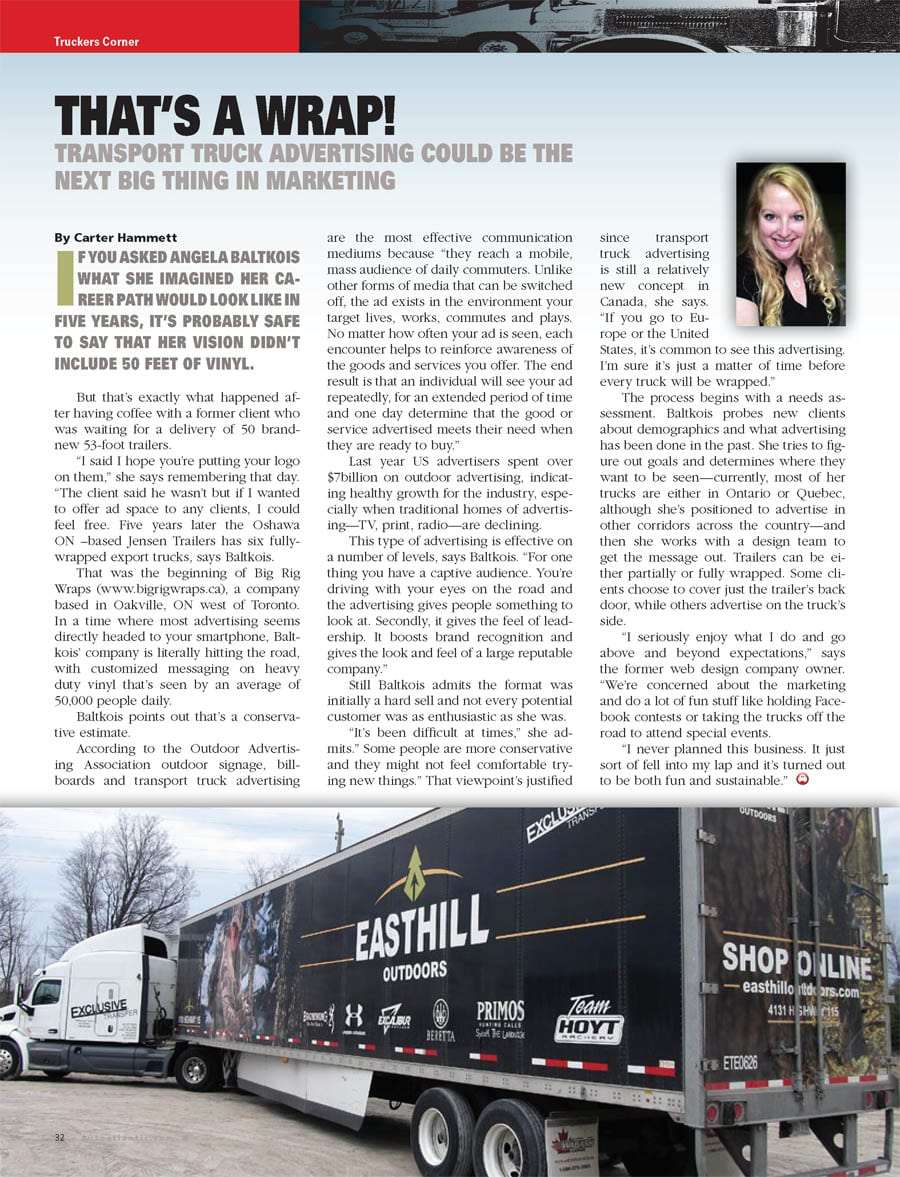 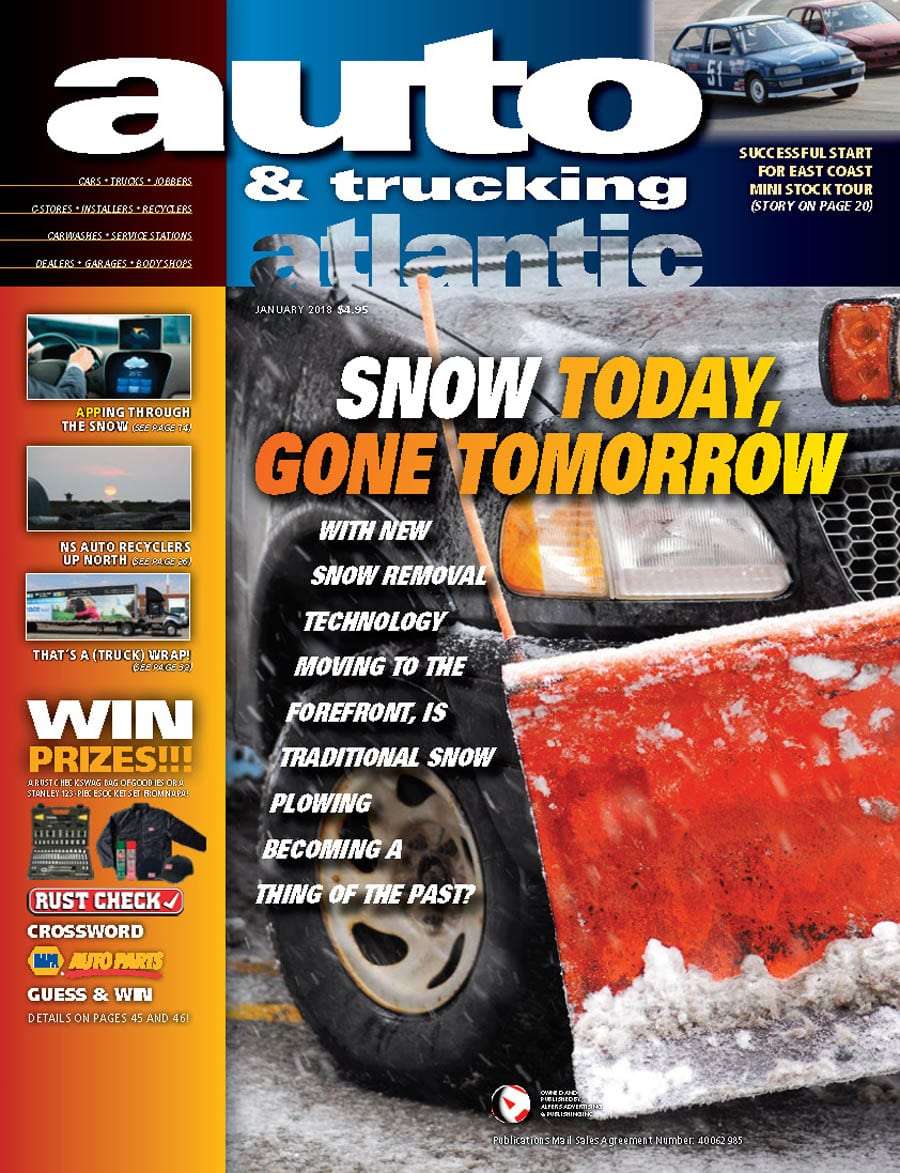 If you asked Angela Baltkois what she imagined her career path would look like in five years, it’s probably safe to say that her vision didn’t include 50 feet of vinyl.

But that’s exactly what happened after having coffee with a former client who was waiting for a delivery of 50 brand-new 53-foot trailers.

“I said I hope you’re putting your logo on them,” she says remembering that day. “The client said he wasn’t but if I wanted to offer ad space to any clients, I could feel free. Five years later the Oshawa ON – based Jensen
Trailers has six fully-wrapped export trucks, says Baltkois.

That was the beginning of Big Rig Wraps, a company based in Oakville, ON west of Toronto. In a time where most advertising seems directly headed to your smartphone, Baltkois’ company is literally hitting the road, with customized messaging on heavy duty vinyl that’s seen by an average of 50,000 people daily.

According to the Outdoor Advertising Association outdoor signage, billboards and transport truck advertising are the  most effective communication mediums because “they reach a mobile, mass audience of daily commuters. Unlike other forms of media that can be switched off, the ad exists in the environment your target lives, works, commutes and plays. No matter how often your ad is seen, each encounter helps to reinforce awareness of the goods and services you offer. The end result is that an individual will see your ad repeatedly, for an extended period of time and one day determine that the good or service advertised meets their need when they are ready to buy.”

This type of advertising is effective on a number of levels, says Baltkois. “For one thing you have a captive audience. You’re driving with your eyes on the road and the advertising gives people something to look at.
Secondly, it gives the feel of leadership. It boosts brand recognition and gives the look and feel of a large reputable company.”

Still Baltkois admits the format was initially a hard sell and not every potential customer was as enthusiastic as she  was.

“It’s been difficult at times,” she admits.”Some people are more conservative and they might not feel comfortable trying new things.”

That viewpoint’s justified since transport truck advertising still a relatively new concept in Canada, she says. “If you go to Europe or the United States, it’s common to see this advertising. I’m sure it’s just a matter of time before every truck will be wrapped.”

The process begins with a needs assessment. Baltkois probes new clients about demographics and what advertising has been done in the past. She tries to figure out goals and determines where they want to be seen—currently, most of her trucks are either in Ontario or Quebec, although she’s positioned to advertise in other corridors across the country—and then she works with a design team to get the message out.
Trailers can be either partially or fully wrapped. Some clients choose to cover just the trailer’s back door, while others advertise on the truck’s side.

“I seriously enjoy what I do and go above and beyond expectations,” says the former web design company owner. “We’re concerned about the marketing and do a lot of fun stuff like holding Facebook contests or taking the trucks off the road to attend special events.

“I never planned this business. It just sort of fell into my lap and it’s turned out to be both fun and sustainable.”

Special thanks to Carter Hammett of WordGarden.ca for writing this article!
Connect with Carter on LinkedIn

Big Rig Wraps Transport Truck Advertising (Big Rig Wraps) is the premier provider of large-scale outdoor advertising on trucks up to 53 feet. Through a series of partnerships created with fleet truck owners, graphic designers, and certified installers, we make it possible and affordable for companies to take their advertising on the road, locally, regionally, nationally and internationally, even if they don’t own their own fleet. Learn more about Big Rig Wraps here.

Pause and Pivot During Economic Downturns to Grow

Want to see what your brand looks like on a truck? Fill in the form and we will send you a free mockup.